I discovered the Koelfontein Chardonnay a couple of years ago by ordering a delicious bottle on the terrace of The Tulbagh hotel.

I had never heard of it – nor indeed any wine estate in Ceres, which is much better known as a fruit growing centre. The Conradie family, the seventh generation farmers who own Koelfontein, have abundant orchards, but they also own the only vineyard in the Ceres Plateau district, just six hectares split between Chardonnay and Shiraz on the steep, south facing slopes of the Gydo pass just north of Prince Albert Hamlet.

The family launched their own wine label in 2002. They currently employ Dewaldt Heyns, winemaker at famed Saronsberg in nearby Tulbagh and one of the elected Cape Winemasters Guild, to make these tiny production wines. The style is unabashedly new world, ripe, big and bold and well-oaked: we’re excited to introduce this duo to the UK market. 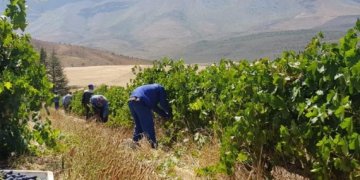