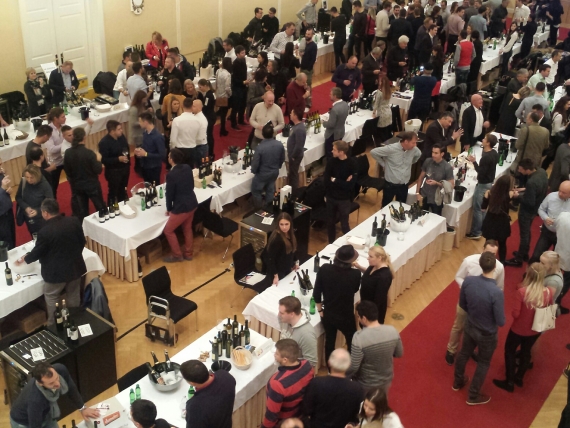 It took just an hour to fall in love with Ljubljana: that’s how long it to arrive in the city centre from touchdown.  It’s a beautiful city - a toy town, to be sure, with a population of just 275,000 - with the style of Italy and a touch of the elegance of Vienna mixed with an idiosyncratic, multi-coloured Portmerion-like (think The Prisoner) character all of its own.  A large part of the centre is pedestrianised, making it the quietest capital city I have ever visited, and one can wander freely among the mix of 17th century Baroque churches, worthy civic palaces, bustling market and art nouveau facades. I urge you to go – and off season, as I did, to best enjoy the charming peace.

I was there for the 20th Slovenian wine festival, held in two city centre hotels, a chance to taste wine from all over this small country. The grapes grown in the different wine regions in part reflect the country’s neighbours:  Malvasia (Malvoisie) on the Istrian shores of the Med; Sivi Pinot (Pinot Grigio), and Rebula (Ribolla Gialla) and Refosk (Refosco) in the northern parts of the Primorska , the western region near Friuli; the reds Zweigelt and Blaufrankisch in the north east near Austria. Secondly, all over the country there is surprisingly good Sauvignon Blanc and Chardonnay; Merlot , Barbera and Cabernet Sauvignon (often blended). A real discovery was excellent Pinot Noir, usually in a restrained, old world vein, from the Vipava Valley.

What are my conclusions after just a couple of long tasting sessions?  Well, as a catholic wine drinker, I came across lots of wines that I would enjoy drinking myself; but then the protestant merchant side kicks in and thinks, yes, this glass is impressive, but are SVS customers ready for deep gold, dense, four year old, Rebula?  Or 2017 Svicek, a crisp, young red wine to be consumed immediately? Or, frankly, most Refosk, whether from the famed red soils of Kras or not.  Some of the reds, are, without beating about the bush, problematic.   There’s often a lack of complete ripeness; and off flavours which are reminiscent of low-level cork taint and may reflect poor cellar cleanliness.  However, one can see the point of some of these raw and youthful Refoscs and Zweigelts: their acid bite would go well with the local diet, and in particular the numerous pig dishes (a starter in a Slovenian restaurant one night served up pig six ways: two types of ham, smoked sausage, liver pate, little morsels of crackling and, for moisture, white and creamy pork fat!).  The crunchy local reds, as young Loire Cabernet Franc, can cut that richness.

The whites, which fortunately make up over 2/3 of production, are definitely more interesting, successful and marketable.  The examples from the north-west are just as fine as those from Friuli across the border in Italy. I tasted one Sivi Pinot (Pinot Grigio) which was sensational: mid gold, honeyed and powerful, yet totally dry. Likewise in the right hand even Tocai Friulano - which is actually the humble Sauvignonasse - could give excellent results.  Perhaps most distinctive are Rebula and Sipon (Furmint), the former made in a wide range of styles from light and fresh to oaked and weighty.  The locals often seem to like their dry whites - even Sauvignon Blanc - aged, with mid to deep gold colouring, and complex flavours of bitter oranges, taffeta  and mushrooms. Fascinating as these are, like old Savennières, are they commercial outside Hackney and Hoxton?

As I write I have barely seen a price – all depends on that. The good growers sell their wine with ease locally (most wine produced is drunk within this prosperous country) and only time will tell if they might drop their prices to satisfy the begging of an impecunious British merchant offering a devalued currency and in order to see their wine drunk in the most interesting and competitive wine market in the world.