A wine merchant skipping up the Apennines...

Just back from walking the Via degli Dei, literally the Way of the Gods, from Fiesole, just outside Florence, to Bologna. It sounds a long way but it's under 80 miles of walking. Of course there is the small matter of the Apennines in the way, with one crest at over 4,000 feet, but it was a glorious excursion, often through tranquil woods of beech and chestnut, and occasionally marching on 2,000 year old cobblestones laid for the military Via Flaminia. We finished by tripping down the longest arcade in the world, over 2 miles downhill from the Sanctuario di San Luca to the old gate of Bologna (Tagliatelle al Ragu here we come!).

...and this is what kept the wine merchant going....

Up in the hills, far from civilisation, wine prices reverted to the level last seen in Britain in the 1980s. Here is a list from a little inn in Monzuno - and yes, these are prices in euros for 75cl. bottles of wine, not glasses.  Oh happy days... a bottle of gently fizzing, just off-dry Pignoletto to start with and a chunky Sangiovese Rubicone from Emilia-Romagna to follow - with change from £11 quid.. 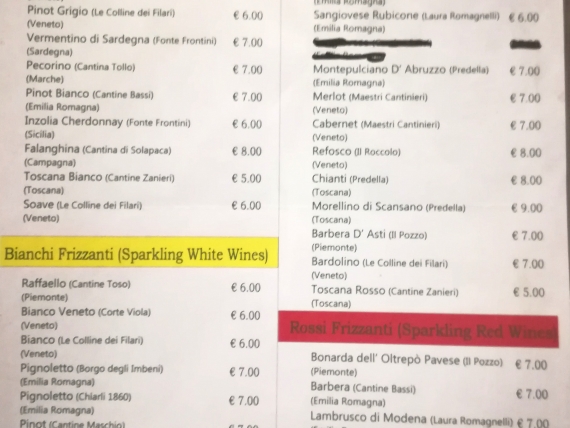